Last week Adam, Sholto and I managed to try out the new rules release from Osprey, Ronin.  I say managed, but I mean "barely managed" due to a notable lack of terrain and a tape measure!  Luckily the rest of the guys at Aberdeen Wargaming Club were obliging enough and we scrambled together everything we needed (thanks for the trees John!) 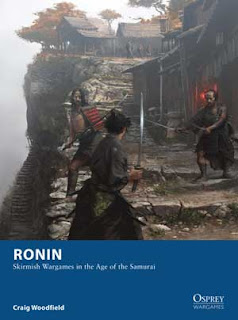 As he was the only one with the rules and also provided all the figures, Adam guided us through our first game. Despite this handicap, everyone was impressed by what looks a solid set of rules.  We tried a three player game, each of us with identical forces: 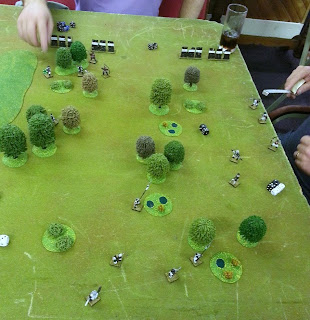 Sholto, last to arrive, is forced to deploy in the middle.
Everyone then heads straight toward him!
It was a typical trial game; we generally made moves and attacks to "see what happened" reading the appropriate rules as we went along.  Although we missed a fair few smaller rules, the core rules were very easy to grasp.  We managed two big, multiple combats without any difficulty, something I'm very impressed with.  Just for the record, my Samurai drew the first kill of the game, beheading Sholto's Samurai after honourably defeating him in single combat (my two Ashigaru were just there to cheer him on, honest!) 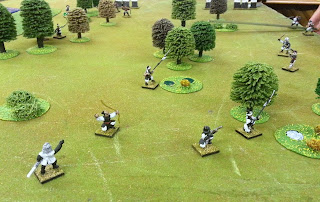 My Samurai honourably leads from the rear.

The turn starts simply enough with a Priority roll, the player with the highest roll gets to activate a model first and subsequent players then activate one model.  With each activation, a figure can move or run and has the choice to make a ranged attack.  That's it, pretty logical.  There are some restrictions for wounded models (actually, there's a great sliding scale for light to grievous wounds in the game) and a nice mechanic for trying to evade close combat.

As I mentioned, players have the choice to shoot in the movement phase, albeit with a couple of negative modifiers on the dice roll.  There are two main ranged weapons in Ronin; the Yumi and the Teppo (Ninjas have access to Shuriken, but I haven't tried them yet.)  The Yumi is the Japanese bow and, in Ronin, is the rapid fire weapon, able to fire twice each turn. It isn't particularly powerful however, and is really unlikely to kill someone with one shot.  The Teppo is, of course, the Japanese Arquebus.  You'll be lucky to get more than a couple shots in a game with the Teppo, it needs reloaded after each shot and is wildly inaccurate at long range.  It does however reduce the effectiveness of all types of armour, ignoring most, and so is the well capable of killing the most powerful figure with one shot. 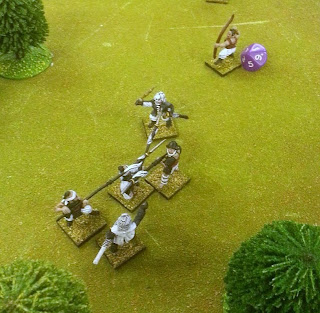 The first combat of the game sees two Ashigaru poke each other with long sticks.

Shooting is handled very well in Ronin.  I dislike games where it is too easy to do something, and killing someone with the Teppo or Yumi is suitably difficult.  When you do take someone out, usually at short range, it is appropriately satisfying.

After moving and shooting, we come naturally enough to combat.  Now I'll say straight up that I love the combat mechanic in Ronin, it's a wonderful blend of decision making and rolling dice, not the typical run up and attack.  The first step in any combat is to determine a combat pool; each combatant contributes a specific number of tokens to the combat pool for their faction.  A Samuri will contribute three or more tokens, an Ashigaru two tokens, while a peasant or bandit only one token.  The player will use these tokens in the ensuing combat. 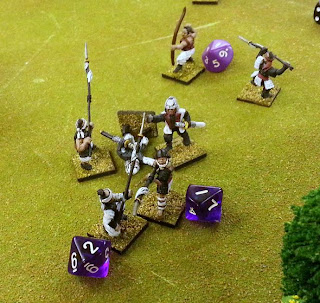 Now we're talking.  My Samurai puts down his counterpart, then proceeds to behead him!
You don't get that in the UFC!

Both players involved in the combat then simultaneously split their combat pool into two piles, attack and defence.  The next step is to determine the initiative order for that specific combat; both players roll one D6 and add any modifiers (the heavy Nodachi sword penalises initiative, but the Yari spear gives a bonus.)  This will result in an initiative order BY MODEL, not by player, which I think is genius.  In initiative order, models can then spend one attack token to attack, with the option of spending another token to enhance the roll (essentially, adding a dice to the roll.)  Defending models always get a defence dice roll, but can also enhance it by spending a defence token.  Dice are rolled, modifiers and armour bonus' applied and injury is handled in much the same way from ranged combat.

There's a nice balance to the combat mechanic and it gives the player plenty of choices to make.  You may, for instance, really want to attack first, so you could spend any token to enhance the initiative roll. Alternatively, you may have a Samurai with the Tetsubo heavy club who could probably kill everyone he's facing, so you spend all your tokens to attack multiple enemies.  Some things we learned in this game; Samurai are really hard to kill in combat, almost impossible if they enhance their defence.  They still don't like a Teppo shot to the face though. 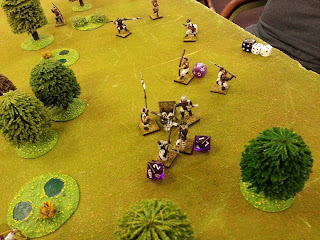 The rest of the battlefield. The other warband close in on the combat.
We're using dice as wound markers, Ronin only uses the traditional D6.

Following combat, each figure is then able to perform an action.  This includes reloading the Teppo if you are able, shooting with the Yumi, Resting and other objective/victory point actions like beheading someone (nice) or looting a corpse.  A word on the injury progression in Ronin, each step of which impacts a figure's ability to fight.  Starting at stunned, which is easy enough to recover from, the first injury is a light wound, not only can you not heal this in game, it puts you at a disadvantage in combat.  Suffer a bad enough injury and you'll move to grievous wound, where you'll suffer penalties in every phase.  Anything worse than a grievous wound results in death, but there is a nice alternate progression, where even the strongest model can be killed by enough light wounds.  Very elegant and a refreshing change from seeing a wound characteristic on every model profile.

Ronin has specific lists for eight factions; notably the Bushi (traditional Samurai and Ashigaru,) two types of warrior monks, Koreans and Ming Chinese and my personal favourite, the peasants with their hired Ronin warriors (seven of them?)  In addition to their own model list, most of the factions can hire other models including (obviously) Ronin, ninjas and wandering warrior monks.

Beyond the basics, Ronin just puts layers of flavour into the game.  There are rules for Bujutsu (martial arts) which give your models specific abilities; my favourite is Yadome-Jutsu, which lets your warrior swat incoming arrows out of the air with his sword!  Quality.  There are rules for mounted combat, different abilities for experienced warriors, rules for unarmed or submission attacks (fancy playing a campaign where you capture an enemy's leader?) Many of the different factions have specific rules for different models or victory conditions.  Some factions can carry a banner that boosts your morale; Koreans gain bonus victory points for killing Samurai, bandits for looting corpses.  The Bushi faction, who lose victory points for dishonourably hiring a ninja, can have their Samurai commit seppuku if they lose the game to try and salvage a draw!

Finishing off the book are some scenarios, terrain and weather rules, quick campaign and experience rules, optional rules for adding a fatigue mechanic and, lastly, rules for adapting Ronin to other time periods.

Any criticisms?  Well, it is a little token heavy; in theory you need four types of injury markers, as well as other sundry tokens.  At this level, keeping track of who ran or shot earlier in the turn wasn't too bad, but adding more figures will probably make some method for tracking these necessary.  To be fair, this probably seemed like a problem simply because none of the three of us has an appropriate set of generic tokens.  I'm also not a fan of authors saying "[this faction] will be at a disadvantage against [another faction]"  That smacks a bit of improper balancing the faction lists. Still, I can put up with that in one off games and in a campaign, balancing should be easy enough to adjust.

Overall, Ronin ticks most of the boxes it needs to; straightforward and logical turn order and set-up, well scaled difficulty, wonderful combat system and the ability to make important choices about how you fight.  In my opinion, Ronin is easily the best written and explained set in the Osprey Wargames series.  Well worth the £8.19 I paid for it.  Now to find some Samurai figures.
Posted by Vladdd309 at 13:32