An apology and a cry for help!

An apology is due to the continued lack of activity on the blog lately. 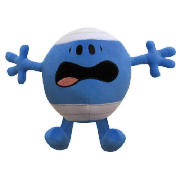 Not being satisfied with having a jiggered hand, my back decided to get in on the act and put itself out!  As any fellow sufferers out there will know, this is extremely emasculating and involves lots of moaning and grumbling, coupled with an inability to do almost anything productive!!!  Thankfully it's gradually eased off over the last couple weeks.


We've also decided it's time to move house again, so most of my free time has been taken up with a (surprisingly large) number of little DIY and decorating jobs around the house.


However, I have managed to finally put brush to paint on a Desolate and Soulless crew for Malifaux. 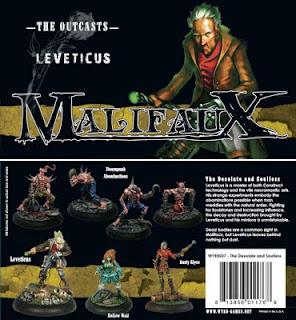 I started out with two of the four Steampunk Abominations in the set: 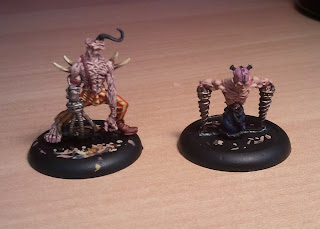 Fairly quick paint jobs here.  In Malifaux, the sole purpose of these guys (four of them) is to charge forward on turn one and transform into the Desolation Engine, so I didn't feel the need to spend a huuuge amount of time on them.  I would have liked to blend the skin a bit more smoothly, but it looks fine from a couple feet away.


The guy on the left is pretty much finished while the other is half finished.


What I'd like from you though is a bit of advice on how to paint gore (the SPA on the right has been disemboweled.)  I've tried some reds with a darker wash, followed by some gloss varnish, but it didn't look particularly "gutty"  Just not sure how to proceed.

AWOL and a purple heart?

So no posts on here for quite a while.


Unfortunately, I injured my hand in a "bloody painful short term, hopefully not a major problem long term" kind of way; some muscle and tendon damage making any repetitive motions agony.  And, although it is only my off hand that's the problem, I've been unable to do almost anything productive - work, chores, paint or assemble anything, play the guitar, use the computer or the Xbox.


Fortunately, there's been an absolute heap of sport on:


Watched every stage of the Tour de France - something I haven't been able to do in years!!!  Some great climbs and an immense time trial by Cadel Evans - brutal!  A really worthy winner. Sssschleck brothers, as usual, tried not to lose the Tour, instead of trying to win it (and pissing people off by whining about the dangers of downhill racing!?! WTF?)  Hope Contador isn't punished retrospectively as he's still a great cyclist (and the thought of a Scccchleck winning the 2010 Tour by default would be pretty hard to stomach!)


I also flicked through all four days of the Open golf (stop moaning Fozzy Bear, I mean Rory,) watched each Grand Prix (really depressed over the new BBC/SKY deal though,) some darts, a fair bit of cricket and some pre-season football games.  I made a point of catching the start of the Scottish league season, but unfortunately Aberdeen got off to their usual start (home draw, away defeat.)


Gaming has been non existent, as has any painting or modelling.  I have gone through some rulebooks though.  The Mrs bought me Warhammer Historicals "Gladiator" rules to cheer me up.  Expect a review soon, once I'm able to type with more than one finger again!  I also managed to read through the Hail Caesar and Clash of Empires rules again, which has given me a some ideas for a new project.


I've also ploughed through a heap of books lately; Richard Mile's Carthage Must Be Destroyed, Tom Holland's Rubicon, Tim Severin's Odinn's Child and reread Alison Weir's Lancaster & York.  I'm currently halfway through David Durham's Acacia.  It's a bit GRR Martin-Lite at the moment, but still finding it quite enjoyable.  If the mood takes me I'll post up a few reviews,


Lastly, the lead/resin/plastic mountain continues to grow apace. I received some long overdue bases from Micro Art Studios, probably for my Malifaux crews.  I also ordered two of the Hell Dorado starter boxes, Westerners and Saracens (apparently the new rulebook is en route to the UK as we speak.)  And, thanks to an absolute BARGAIN on eBay, some EDEN miniatures are on the way too.


So there's the last three or so weeks.  Not much fun, but, of course, it could be a lot worse.  I'm going to try some more painting later this week and see if I can post some of the results.


P.S.  I've just realised that this post took about six days to write - in little sentence sized sessions! Ridiculous.
Posted by Vladdd309 at 14:47 No comments: