Yet more Malifaux news - When will it stop? 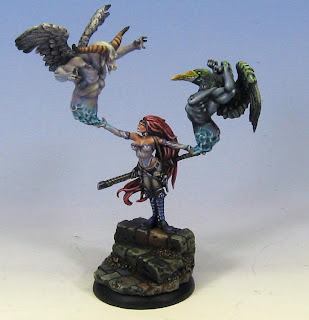 Is anyone else getting high?


Wyrd have been drip feeding more images for their Twisted Fate release.  Here's Lady Justice's Avatar form; wonderful painting and colour choice, great sculpt, but honestly, wtf is going on there? I assume the apparitions relate to her new rules or background in some way, but besides that, your guess is as good as mine! 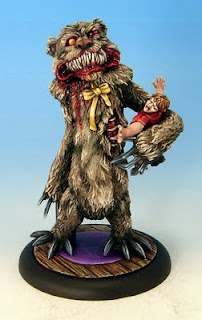 Nightmare Teddy has also been revealed, but I can't say I'm too thrilled with him.  He's a bit too scrawny clumsy looking for my tastes, particularly his feet and arm holding the figure. The  original Teddy sculpt was genius simply because he looked like your average teddy bear with a horrific head and claws.
A couple nights ago, I listened to the first half of the latest D6 Generation podcast, which featured an interview with Eric Johns from Wyrd.


He brought up the new Avatar and Nightmare forms for Malifuax and, although not explicitly, implied how they fit into the existing game.  From what I gathered, your crew will start out as normal with your master, totems, minions etc.  Then, once certain conditions have been met, you can advance your master to either their Avatar or Nightmare form.  Eric made it clear that these new forms have been designed to have alternative abilities to their original, not superior abilities.


The best comparison I can think of is the Prime and Epic Warcasters from Warmachine; different stats and abilities, but not necessarily better.  Eric also talked about keeping Malifaux as a small skirmish game (6-10 miniatures a side) and the Avatar/Nightmare forms complement this, giving plenty of miniatures to choose from while not crowding the game with too many figures and rules.


I'm a lot happier with Wyrd after hearing this.  I don't mind games companies moving their storylines along, infact some companies, Privateer Press for instance, do this very well indeed.  Moreover, I was concerned about the situation arising where you're playing a game with characters that have been killed off two or three books ago.  And if that sounds unrealistic, how many of you out there bought all three Valten figures for Warhammer?  I don't even think his rules are in the latest Empire book! 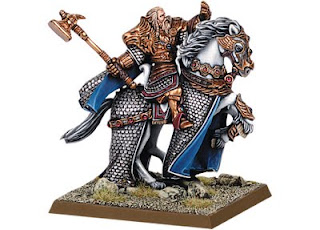 Remember this guy? No?  I'm not surprised!
Having seen Wyrd's release schedule for GenCon, Twisted Fate looks like being a much bigger release than Rising Powers was.  Hopefully we'll see the remaining models from RP released along side the new ranges.  I also hope that the Twisted Fate doesn't invalidate players not using the Avatar/Nightmare miniatures i.e. you'll be able to play normal Seamus against avatar Lady J. Thanks to some alcohol induced inactivity on Sunday, I was able to finally have a flick through Cassino, the latest supplement for Flames of War (btw, thanks Ginge, I had a blast!)  It's taken me a bit of time to get round to jotting some thoughts down, but, for what it's worth, here they are:


Cassino is a fairly hefty softback tome, coming in at 152 pages, with plenty of eye candy; lots of maps and miniature photos alongside a few nice illustrations.  I particularly like the cover art, from the first preview to the final book - it gives you a perfect snapshot of Cassino, lots of infantry and rubble, the odd tank and the iconic monastery in the background.


It's also, by Battlefront standards, an extremely well make book.  The binding looks quite strong so will hopefully last a lot longer than some of their other books (I'm looking at you A5 rulebook!)


Cassino starts like many other Flames of War books do, a little background and straight into the army lists.  The previews from Battlefront and others have made it particularly clear that Cassino is all about infantry.  As many players (not including myself however,) think Infantry lists are boring and defensive, Battlefront have gone all out to add character to each list AND provided a flexible escalation campaign specifically for infantry.

The Axis forces begin with the 1. Fallschirmjager Division, your fairly standard Fearless Veteran light infantry.  I love the Fallschirmjager lists in both Hells Highway and Earth & Steel and, barring the support options, it's pretty much the same thing you'll see here.  The highlights of this list are that, firstly, they'll pass morale checks on a 2+, secondly, you can take two pioneer combat platoon choices and a load of artillery, but, lastly, you'll only have one mobile element (Panzer IVs, StuGs or some tank hunters.) The 44, Reichsgrenadierdivision are up next; a Confident Trained list full of injured evacuees from Stalingrad and their green reinforcements.  An interesting Support option is the choice of Italian Semovente Assault Guns; something you don't see on the table everyday.  Overall, a nice list for Axis players who like to have more stands then normal on the table.

Lastly there is the 90. "Sardinien" Panzergrenadierdivision, the mobile reserve of the Axis Cassino campaign, who fought basically everywhere and everyone at some point.  Their Motorized Movement special rule gives them a bit more survivability (basically, a skill test to avoid being destroyed alongside their 3-ton truck) and, compared to everyone else in Cassino, they have plenty of mobile assets. Another nice list, but I don't really like MG teams as combat platoons, as too often you don't get the benefits of their firepower.  However, these guys, like the Earth & Steel lists, are a lot cheaper compared to lists in older books, specifically to compensate for this.


There are some unusual support options for the Axis forces; the Gebirsjager Platoon gives you some Mountaineer teams, the Luftwaffe Heavy AA platoon offers some cheap 88s at Reluctant Trained, while Von Mackensen's reserve gives you some really cheap Panthers, but, regardless of the mission you're playing, they'll be the last thing to arrive on the table!


Lastly, the Fallschirmjager and the Reichsgrenadier forces can take Cassino fortifications, whilst the Panzergrenadiers can take the, slightly more restricted, Cassino Field Fortifications.


So what appeals?  The Fallschirmjäger are the main reason I bought the book, so they obviously appeal to me.  Besides them, the combination of some Reichsgrenadiers and the cheap(ish) fortifications could produce some interesting defencive combinations.  The Panzergrenadiers I'm not too sure about; I just don't like my main force to be composed of MG teams.  However, with the motorized assault special rule, the Field Fortifications available and some mobile support options, you could make some effective lists, especially against other infantry.

Email ThisBlogThis!Share to TwitterShare to FacebookShare to Pinterest
Labels: Cassino, Flames of War

Just found this in my inbox:

Waterloo - Tabletop Wargaming in the Age of Napoleon

Can't say I'm a big Napoleonic player (at least on land, I have played my share of Age of Sail though) so this doesn't really grab me as a must buy.  Napoleonic rulesets haven't suffered much inattention recently, and a number of new releases are on their way, for instance Crusader and Victix.

No mention from Warhammer Historical what makes their system different from any other, although the previews on their site strike me as very similar to Black Powder.

A Gladiator release?  Could be dodgy.  The previews look very impressive and the reference sheet hints at decent level of depth.  The problem with most Gladiator games (Ludus Gladiatorius, Spartacus etc) is that they boil down to simply running towards each other and slashing away!  Hopefully, this ruleset will try something different.

Gladiator also supports mock sea battles and the good old chariot race, along with some form of campaign system.  Despite myself, I'm quite looking forward to having a look at Gladiator.

So I'm pleasantly surprised by the sudden new releases, but in all seriousness WH, where's the support for WAB gone?

The spooks over at Tabletop Fix have just posted the actual miniatures for Lady Justice Nightmare Box.

In terms of the scuplts, it's a bit of a mixed set.  Lady Justice, to me, is simply a bit "meh," not particularly exciting, just a "look at my tits" kind of pose.  Judge is a little more dynamic, particularly as he's stabbed himself in the leg.  Will he have some kind of self-inflicted-wound-for-X-special-effect rule?


The Death Marshals however look immense - I love the bear claw on the guy on the right's leg!  The guy coming out of the coffin looks really menacing and the third Marshal looks really nonchalant, casually carrying his coffin and dragging a corpse around.


The painting standard from Wyrd is to their usual high standard.


We've still no real idea whether or not these represent the Malifaux story moving on i.e. LJ and co are dead, or if this is an alternative release for some alternative rules i.e. Wyrd having a bit of fun with their IP.  Looking forward to the Twisted Fate release to find out.


Incidentally, I thought Judge has the "Never Me" rule to prevent him becoming undead?

A couple of announcements have really caught my eye this week: 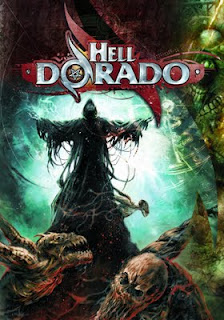 First off, Cipher Studios have finally announced pre-orders for the Hell Dorado rulebook!


Doesn't really look like a big announcement, but an English rulebook was originally announced back in January.  Plus I've had one on pre order from Maelstrom since April!  I haven't played any games with the quick start rules, nor do I own any of the models anymore (although I painted some up for a friend a couple years ago,) but hopefully the release of the full rulebook will get his game a bit more attention.  Hell Dorado has some great miniatures, especially Augustinus Raimond, my favourite: 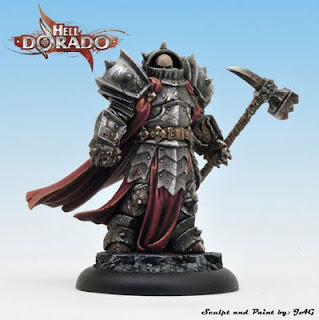 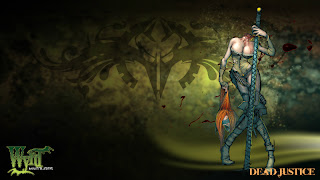 Unfortunately, Lady Justice has been killed!


Possibly this is either her Avatar or her Alternative form.  Neither term means much to me (Avatars were mentioned in the original rulebook though,)  but Wyrd have been using the terms, capitalised, on their website.  Interesting to see where the Malifaux storyline will go this time.
Posted by Vladdd309 at 15:56 No comments:

I've been having a quick look through the new releases for Flames of War.


I was surprised at the price difference between the two Fallschirmjäger artillery box sets available.  The Fallschirmjäger Artillery Battery box includes four guns, two observers, command and staff teams and costs £35 at RRP. 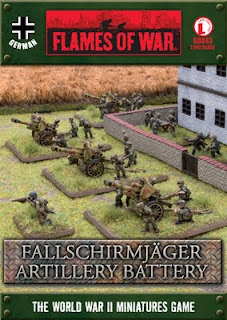 What confused me was the price of the Fallschirmjäger Heavy Artillery Battery at £26 at RRP.  Again this includes four guns, two observers, command and staff teams.


However, the difference stems from the fact that the first Artillery box includes the option for two different guns; the 10.5cm leFH18/40 & 10.5cm leFH18.  The former uses the smaller PaK 40 trailer, making it a Heavy gun team, unlike the latter which is an Immobile gun team. 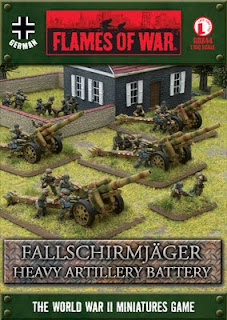 A fair difference in price between the two sets (£9 for four extra trailers,) especially when you consider the two gun options, bar movement, have an identical profile.  Still, nice for the historically minded!


As you can't field a Heavy Artillery Platoon without first fielding an Artillery Platoon, the first box looks like an immediate purchase.  Not sure when I'll get round to picking up the second box set though.
Posted by Vladdd309 at 09:25 No comments: