For the first time in a few weeks, I managed to get along to the club for a game of X-Wing with Adam.  We opted for a straightforward dogfight, as opposed to one of the missions, at a slightly lower than recommended point level.  So I came up with two forces with a named pilot in each, along with a couple gadgets.

Adam randomly selected the Rebel squadron and had Biggs Darklighter in his X-Wing, along with a generic X-Wing and Y-Wing.  I controlled the Imperial Squadron with Maarek Stele (fans of the Star Wars post film books will recognise this guy) in his Tie Advanced, another Tie Advanced and three Tie fighters with differing pilot skills. 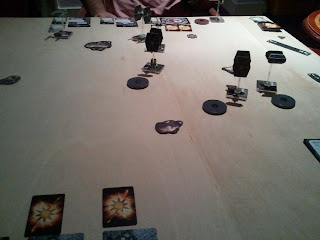 Sadly, as I was late arriving, we were stuck in a poorly lit area of the club.  Consequently, I couldn't get any decent pictures, but for what it's worth, here's the table after about five turns.

I had taken out Biggs Darklighter with some extraordinarily lucky dice, but barely scratched either of the other ships.  The rebels had destroyed my generic Tie Advanced and put the hurt on a couple of the Tie fighters.  All in all, things looked to be heavily in my favour, but in the next couple turns Adam discovered the Ion Cannon on the Y-Wing and started pumping out shots with that, immobilising one ship each a turn.
A couple turns later, I had put Maarek's Tie Advanced far too close to the table edge and as soon as he was immobilised with an Ion shot, he flew straight off the board!  Emperors Hand my arse. 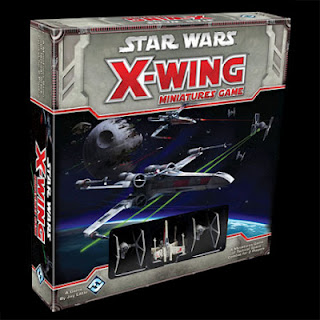 So I had hoped to put up a proper report on what was an absolutely great game, but lack of pics and notes kind of made that difficult.  Kudos to Adam for being a great opponent (he is far better than I at remembering rules and effects in games, so much so, he was correcting my mistakes after a few turns!) We may have a rematch next week, so I'll get the Mrs to set up the camera for me to get some better pics.  If you're at all interested in Star Wars: X-Wing, I heartily recommend you check out the rules and a gameplay video on the FFG site, the WWPD blog and some great posts here and here.

Sorry if this post has been a bit lacking in content, like I said, I had planned for more. Expect better in the near future (I'm on holiday!!!)
Posted by Vladdd309 at 18:42