After a relatively quick (but not rushed) first game of X-Wing, we decided to swap seats and try the same mission with the opposite factions.  Considering that I had suffered two comprehensive defeats in a row playing as the Empire, I looked forward to getting a win on the board with the obviously overpowered Rebel Squadron.  All pilots and upgrades were the same as in the previous game, the details of which you can find here.

I decided to place the Y-Wing covering the shuttle on my left, while the two X-Wings were more central.  My plan was for the Y-Wing and shuttle to plough straight forward through whatever forces were ahead of them (there's no risk of ship to ship collision in X-Wing.) Getting the shuttle off the table should take six turns or so, so durable Y-Wing was the best bet for escorting it.  I presumed that Adam would similarly spread his forces across the table, not knowing exactly where the shuttle would be heading.  Therefore, as he moved to congregate on the shuttle, the two X-Wings should be able to come in from my right, using their superior firepower to knock out any Tie or Advanced they come across without too much return fire.

Philistine that he is however, he decided to forgo anything as sophisticated as a plan and massed the two Tie Advanced and a Tie straight across from the shuttle to bumrush the Rebels!  Still, assuming the shuttle made it past the first wave, it should have a couple turns grace while the Imperials manoeuvre to get back into firing position, giving me enough time to thin their numbers. 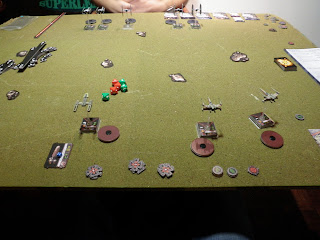 Rebel deployment, with some menacing Tie Advanced opposite

Things started much as you would expect, the shuttle and Y-Wing went straight for the opposite table edge, the Y-Wing putting a target lock on a Tie advanced.  The X-Wings both swung round slightly to my left, one target locking a Tie and the other Focusing.  The Imperials mirrored the Rebel manoeuvres, Darth and co heading towards the shuttle, while the basic Tie and Backstabber moved closed in on the X-Wings. 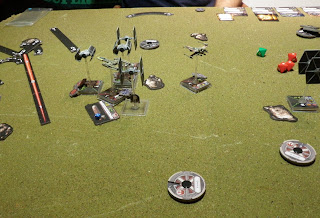 Things get crowded after the first attack run on the shuttle

Shooting, mostly at long range, was a mixed bag.  Neither Darth or his two wingmen managed to put out any damage, but took none in return from the Y-Wing.  Garven Dreis used his one Proton Torpedo attack at long range, to put two damage onto the Tie opposite (one more would blow it up completely,) but Wedge failed to finish it off.  Worse was to follow for him, as some poor defence dice stripped him of his shields following attacks from Backstabber and the other Tie.  Still, it's Wedge, he's in all three good movies, he isn't getting taken out by some fluky dice, is he?

Turn two and I was expecting the shuttle to take a beating.  There was nothing for it but to keep moving forward again, the X-Wings continued moving round to my left.  The Imperial right slowed slightly and put the shuttle into medium range, while Backstabber and the other Tie moved round behind Wedge and Garven.  A quirk of the movement step in X-Wing is that both players decide their manoeuvres each turn blind i.e. you don't know what your opponents is going to do before you commit to what your ships will do.  I gambled that Backstabber would move the similarly to the previous turn, so moved Wedge on a longer left turn.  Instead of this however, Backstabber pulled a tight right hand turn and moved up into close range against Wedge's rear arc.  Not good. 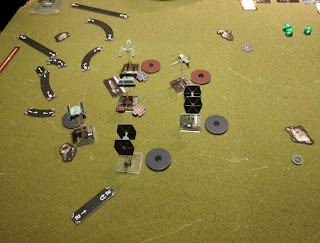 The shuttle desperately limps on towards the board edge

Vader and his two wingmen combined to knock out four of the shuttle's shields, although it could have been worse.  The Y-Wing tried immobilising one with its Ion Cannon, but the attack was evaded.  Next up the Wedge and Garven attacked, but caused next to no damage, instead taking a shield off Vader.  Backstabber then attacked Wedge, rolling four attack dice (two for his normal attack, one for close range, one because he was behind Wedge.)  The net result was one damage and one critical hit.

Ship damage in X-Wing is handled with an elegant little card deck.  For each hit not negated by defence dice or shields, a damage card is dealt face down to that ship.  Most ships have three hull points, so can take three normal hits before going kaboom!  If a critical hit is rolled and not negated, the damage card from the same deck is dealt face up, counting as one damage, but also causing an additional effect.  As Wedge didn't have any shields left and rolled nothing on his defence dice, he got one face down damage card and one face up. Unfortunately the result was: 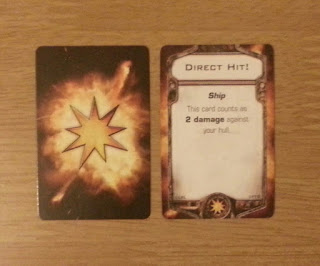 Three damage from one attack was a bit extreme, but that's what happened.  Losing a ship wasn't totally unexpected, but I was annoyed to lose Wedge instead of Garven.  Not only is his special ability much more useful, but Wedge still had his one off proton torpedo attack to make, something I was hoping to use next turn.  I was a bit distracted by that result, so I can't remember if I blew up the other Tie Fighter on my right or if it simply crashed into an asteroid.  Regardless, a rookie Tie Fighter would show up next turn.

Turn three and things looked a bit grim for the Rebels.  I thought it possible to still get the shuttle off the table if I could reduce the amount of fire it would take this turn.  I planned to get Garven's X-Wing close to the Tie next to Vader and have the Y-Wing immobilise the other Tie Advanced (Vader has a high pilot skill, so regardless he would be attacking before either of my own ships.)  The Y-Wing did immobilise the Tie Advanced, but it hadn't moved very far, so was still able to attack the shuttle.  Garven also fluffed his own attack.  At the end of the turn, the Shuttle was down to a single hull point.

Seeing the writing on the wall, I decided to try and at least take Vader down with me by putting Garven at point blank range to his rear.  However, as Vader had the highest pilot skill on the table, he moved and performed his actions last, so was able to double barrel roll out of Garven's arc of fire. Foiled again.  (Although, when flicking through the rulebook yesterday, I discovered you can't perform the same action twice in a turn, so technically this was an illegal move.  Grasping at straws, I know!)

The nearby Tie missed with his attack, so it was up to the Backstabber to finish off the Senator's shuttle.  I only hope that Jimmy Smits was onboard. 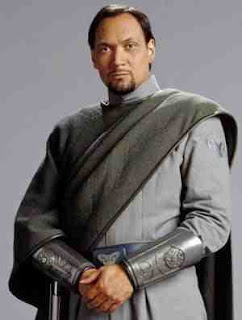 He really bugged me in the that last film

Another enjoyable battle.  Adam pointed out that the two attacks against Wedge were fluky in the extreme, I think that is the only damage card that inflicts extra damage, so it was an unusual result. Still, that's what you get with dice and cards.  In retrospect, I think I should have bunched up my ships and tried to take out the Tie Advanced early on.  The regular Tie can't reliably put out the same damage as the Advanced, so even with respawning Ties, it would have been a easier fight in the later turns.

I'm really enjoying the whole X-Wng experience.  As I'm the only one at the club with a copy, I'm really tempted to get another started box.  Not only would it let me field the "Tie swarm" (eight Ties,) but it is also a lot cheaper than buying the ships and the extra dice pack separately  you really need more than three of each dice.  However, that will have to wait for the moment.  I've decided November needs to be a frugal nerd month.  I'm only allowing myself to buy the essentials; bases, paints, magazines, a new brush or two, different flock, some flags and decals, maybe a rulebook or two.  Like I said, essentials.
Posted by Vladdd309 at 20:38